This blog is no longer receiving any updates. Please head over to WinklerCycling.com to keep up with what is going on in my little world.
on Friday, February 24, 2017 No comments:

Looking ahead to the impact of USAC rule changes

Around the country the road season is wrapping up with most conferences having completed their seasons and crowned individual and team champions. While we are all primarily interested in the performances at the upcoming National Championships, we can also take a moment to speculate as to what Nationals will look like in the 2016-17 season under the new divisional structure.

I have previously speculated about the potential negative consequences of making divisional membership based on program type (varsity vs. club), but now we have some hard numbers to work with. I am relying on the information available at CCN and the conference results that are available as of today.

In my opinion, we can see clear negative outcomes in terms of "National Representation", "Showcasing the Best Teams/Riders", and "Field Composition".

National Representation
Currently there are 16 varsity programs with A riders. These programs are distributed as follows:

This means that 6 out of the 10 active conferences will not be represented in the premier division. Further, 50% of the schools will come from a single conference.

Showcasing the Best Teams/Riders
Of the 10 active conferences, 7 of the conference championship winning teams are club programs. While this means that in 3 of the 4 conferences with varsity teams, a varsity team was the strongest team, in one conference (Rocky Mountain) a club team outperformed 4 varsity programs.

Further, only 9 of the 16 varsity programs make the CCN.com's Top 25 Power Rankings. This means 16 of the statistically strongest programs in the country will not be competing in the premier division.

From an individual rider perspective, the split also dilutes the quality of the premier field for both men and women. According to CCN.com's rider rankings, only 24 of the top 100 ranked men are from varsity programs. For the women it is only 39. This means that the majority of the top ranked individual riders will not be lining up to contest the premier division.

Field Composition
On the mens side, only 7 varsity teams are capable of fielding a full squad (6) in the Road Race. The remaining 8 programs can field a grand total of 19 riders. The resulting mens field will be extremely small and/or imbalanced (large teams dominating small teams).

For the women it is even more problematic. There are only 12 varsity programs that can field a female competitor at Nationals. Of these 12, only 5 can field the full 6 in the road race (an additional team, Brevard, can field 5 riders). If you were to include club programs, a full 12 programs would be able to field 5 riders. This leads to a very balanced and reasonably-sized field.

Conclusion
While I do favor a restructuring of the divisions, I don't think we have gotten to the point where it can be done on a varsity/club level. As previously stated, I think a transitional period is necessary where the "best" club programs should also be included in a redesigned "Division 1". I think "best" can be determined by considering the following:

1.  Club's interest and activity in pursuing "varsity status"
2.  Size of program/roster
3.  Quality of program--past results
4.  Program's interest in competing in the "top" division

This year's Nationals are back in the Asheville, NC area. The Road Race and Time Trial course remain the same as last year, but the Criterium course is new. Because its new that's where we'll begin. This breakdown is brought to you by myself and Joey Iuliano (@Joey_Iuliano) of the University of Arizona. It was his initial tweets about the course that exposed the course characteristics and gave me the idea for the course breakdown.

In an Omnium-style event, it seems reasonable that every "type" of rider should have an opportunity to shine. The road race typically favors those who can climb well and tends to favor smaller and lighter riders. Generally, the CRITERIUM should showcase the sprinters and riders who excel on the flats and can generate big power and high speeds.

Last year's criterium course was an extremely difficult and selective course. In most people's mind, inappropriately so. The Women's event completely exploded with only 5 riders in contention after a few laps. A shortened Men's race had a largish breakaway get away from a severely reduced field. Many riders were pulled from both events very early, making for a frustrating and unfulfilling experience (not to mention expensive).

Many complained and USA Cycling promised to come up with a new course that was flatter and would provide a more appropriate criterium experience. When the course maps were posted, the elevation profile made it appear that we were going to have a basically flat course. However, upon closer inspection it is clear that the those profiles were somewhat misleading. One must conclude that there is not a mile of flat road anywhere in the Asheville area, because this year's course doesn't look much better than last year (if not worse).

As you can see the course is about .9 miles with about 105ft of elevation gain per lap. Note this is 105ft over only .4 miles or so. This equates to an average grade of 4.97%. Compare to last year's course: .85 miles with 105ft gained over approximately .35 miles (an average grade of 5.68%). Although we think last year's uphill section was harder, the bottom corner on this year's course will slow the riders even more before starting the climb. This year's course looks to be on narrower roads (with the exception of the downhill on Main Street) which will further contribute to stringing out the fields. Finally, unlike last year which had basically no flat sections, this year has the town square section (this means the elevation loss is over a shorter distance than last year). Small variations aside, the courses are remarkably similar.

Here's some snapshot views moving around the course:


After some more number crunching I have now compiled a Power Ranking of all the collegiate teams for ROAD. The points are derived from the USAC Ranking System, but are applied with an eye towards how the teams would do head-to-head under the start list restrictions at Nationals (4 riders in Criterium and 6 riders in the Road Race). Version 2 will incorporate the conference standings/results.

The permanent home for the Team Power Rankings is live!

An interesting observation is that only 7 of the Top 25 teams are currently designated as varsity programs. This seems to support my thesis that splitting the divisions on varsity/club next season will be a mistake.

The Individual Rankings were updated for this week as well.
on Thursday, March 31, 2016 No comments:

The promised upgrades to the 2016 Road Rankings have been completed. We are now showing the Top 100 Men and Women and showing week-to-week changes in both ranking position and points.

Some riders will not be listed in the "right" place on the rankings because they do not have the minimum 5 criteriums and 5 road races. Once those results have been added to the system, the rider's rank will automatically be adjusted. Also recall that the scoring races must be within the last 12 months. So, as races drift out of this window, more recent results form the basis of the ranking points and position.

In the case that USAC doesn't provide a point value, we double-check the results that have been uploaded to the USAC system. If a rider does not have the requisite races, he or she is assigned the maximum value for that discipline (RR, Crit).

For the men, Marian University has the most riders on the list with 11. Here is the Top 10 schools on the list:

The full rankings can be found here:  http://winklercycling.com/collegiate-rankings.html

The road season is now underway for most conferences. USAC is posting conference recaps on their News Archive (click on "collegiate" on sort by column, actually a filter).

CU Boulder will be racing this weekend in Golden, Colorado. The Oredigger Classic includes a Hill Climb Time Trial and a Criterium hosted by the Colorado School of Mines.

Below are the Top 10 Teams by number of USAC Licensees as of Tuesday March 15, 2016. In total, there are 2,332 active collegiate licensees.

The 2016 Individual Road Rankings have been updated as well! This week's update includes the ability to see each riders' separate points and rank in the Road Race and Criterium disciplines (by rolling over the place and point "buttons").

Starting next week I will be highlighting movement on the list. Arrows will be included to indicate shifts in both "rank" and "rank points", as applicable. 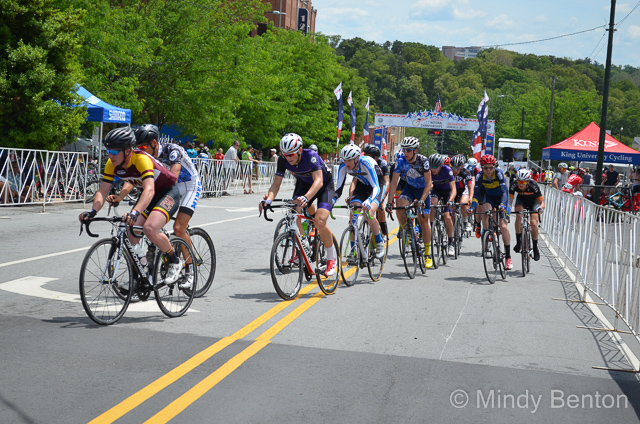 Below are the Top 25 Men and Women rankings as of February 24, 2016. Stay tuned for a more permanent ranking page, with regular updates during the season.


This ranking is based on the USAC Ranking/Points System and, therefore, incorporates its various shortcomings. This list only includes those riders who have purchased their 2016 collegiate racing license, and therefore may not include everyone racing this season. As riders renew their license they will be automatically included in future updates.


The ranking is based on an aggregate of each rider's Criterium and Road Race ranking. As a result, this identifies "all-rounders" more than specialists. To see how each sub-discipline is ranked you can use the USAC System directly.


The number in parenthesis is the rider's age. The school is included along with current Division (and varsity identifier, anticipating upcoming division changes).

** there is now a permanent page for these rankings - click here


USA Cycling has published a little data on the impact of the club/varsity changes coming for the 2016-17 school year. Primarily they have focused on how field sizes will be impacted. While this is an important consideration, another important thing to examine is the change to the results. Below you will find how the Top 20 results in each event would have been impacted in 2015.

My conclusion is that the proposed organization will split the quality of the collegiate field, and in the case of road,  dramatically so. At first glance, this split looks even worse than what occurs under the current "modified small/big school division structure". In my opinion, at least in the short term, this is a bad thing for collegiate cycling.

I'll play devil's advocate and counter that over time the best riders will migrate to varsity programs because of the financial benefits of doing so. This is a valid argument and I agree that as the number of varsity programs and opportunities increase, more top riders will attend those schools. This argument is somewhat undercut, however, by the nature of universities and colleges with varsity cycling programs. The current reality is that primarily small schools with relatively small NCAA Athletics programs have been successful creating a well-supported cycling program (I previously researched this and, if memory serves, the majority of these schools have less than 5,000 students). Until varsity cycling programs are implemented across a broader variety of institution sizes and types offering the full-range of educational opportunities, many of the strongest competitors will be "lost" to club programs or simply choose not to compete in collegiate racing.

v.2 of the Collegiate Category "A" Map 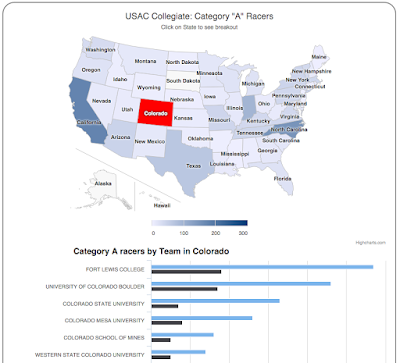 I reworked the visualization adding greater detail. It doesn't quite fit embedded into Blogger, so you'll have to click over to my website to view the interactive version.

The demographic insights remain the same, number one being that collegiate cycling is concentrated in very few states.  Almost 50% of all racers are attending school in 1 of 4 states.

One interesting project that could flow out of this would be finding the geographical location for Nationals competitions that results in the fewest miles travelled.

Version 2 of the Map

Visualizing the distribution of Category A competitors in 2015